Purpose: Oracle Test Manager is how we track what issues have been encountered during validation or testing and what the status is on the resolution of those issues.

Oracle Test Manager (OTM) accounts are provided to each college upon request of their PM. User names are in the format of Business Unit Number _ First Initial Last Name (example 230_jdoe). If access is needed, or account information has been misplaced, contact the college PM or the ctcLink Testing Team OTM Contact - Anna Rankin - arankin@sbctc.edu.

Logging in to OTM 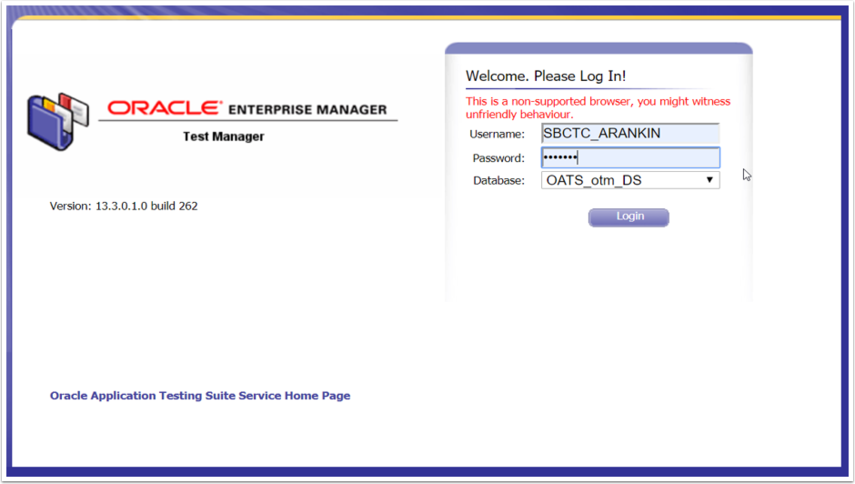 When you access the OTM Log In page, the first thing you are likely to notice is a red warning that says "This is a non-supported browser, you might witness unfriendly behaviour." This is shown in every browser. It is recommended that you not use IE or Edge as those browsers have shown unexpected behavior.

Verifying or Selecting the Project in OTM 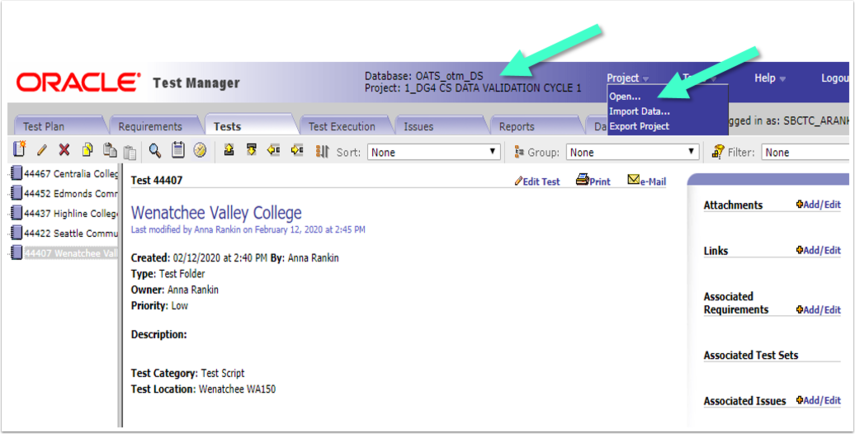 Every time you log in to OTM, you will first want to verify that you are in the correct Project. OTM should log you in to the project you were most recently working in, but that may not always be the project you want to be working in now. When you need to switch to a different Project. select the Project drop down and then select Open. 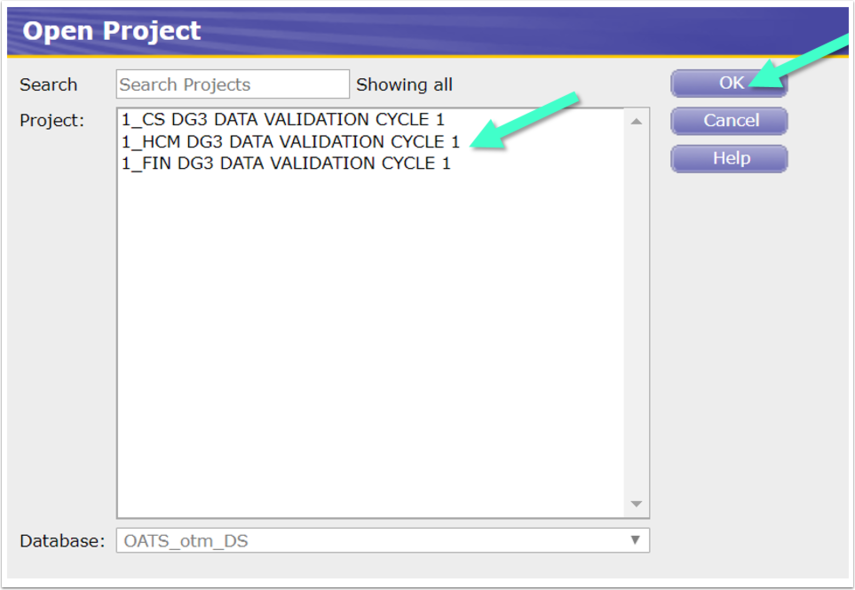 Select the correct Project and either double click on the project name or single click and select OK.

Report a Data Validation Issue in OTM
Creating an Issue

To enter an issue found during validation, first navigate to the Issues tab and then select the 'exploding triangle' icon in the upper left. This will bring up the Add Issue screen as shown below. 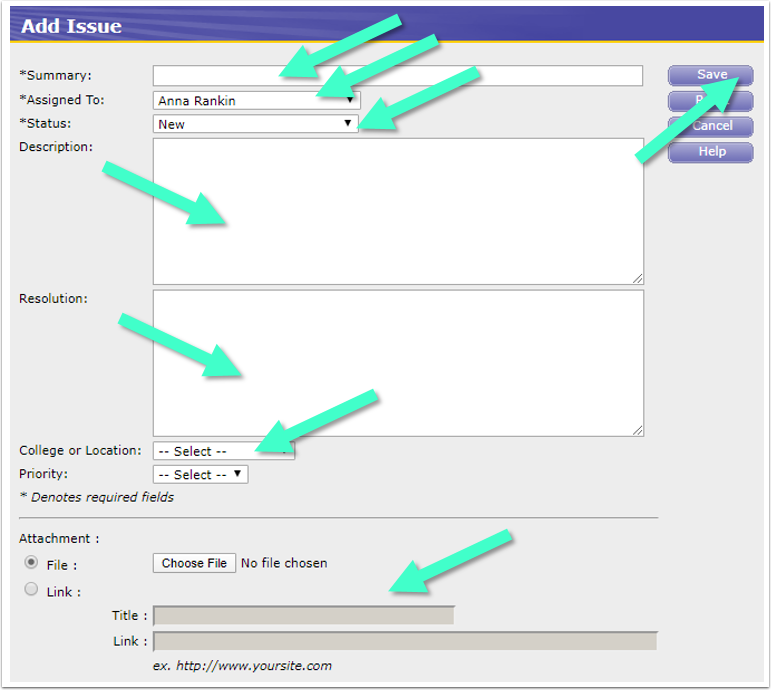 When entering an issue, there are a number of fields that must be filled out.

After all of that, don't forget to press the Save button!

After the issue has been submitted, you can verify that it was submitted correctly by looking in the left navigation panel. It will now be listed with any other issues that have been submitted.

How to Find, Edit, or Update an Issue

Once an issue has been successfully created, there will be times when an end user will need to find, edit, or update that issue ticket. Perhaps they selected save and then realized they had forgotten to add some information. Perhaps the analyst has entered a resolution and the end user now needs to affirm that the issue is resolved. 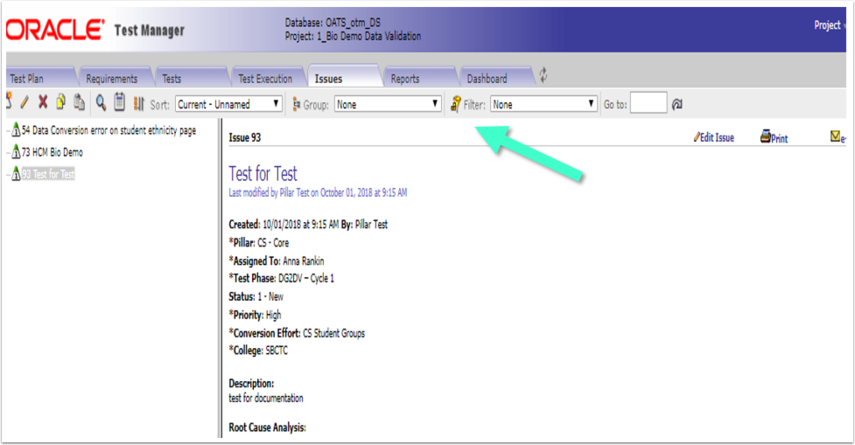 With this many colleges entering issues, there are bound to be quite a few to sort through. This is made manageable by creating filters. After navigating to the Issues Tab, select the funnel image next to the word Filter as shown above

To create the Issues Created By filter, under Field select Created By. Set the Operator to equals. Under Value, select the end user's name. Then, select Save and save the filter.

To create the Issues Assigned To filter, do the same, but under Field select Assigned To rather than Created By.

After a filter has been created, the Issues Tab will default to the most recent setting so if you filter the issues and then navigate away from the issues tab, the filter will still be applied when you navigate back.

An issue was assigned back to me. What do I do?

Navigating to an Issue

In order to navigate back to an issue that needs to be edited, after logging in to OTM, select the Issues Tab. Once on the Issues Tab, there are multiple ways to locate the issue you are looking for.  If you know the Issue Number, enter it in the Go To field. If the issue is assigned to you, or created by you, you can select one of the filters created in the previous section and then find the issue in the left navigation column. Or, you can select the magnifying glass search icon above the left navigation column and create a search based on what you know about the issue.

Updating or Editing an Issue

To start updating your issue, select the issue in the left navigation column and then select the edit icon (pencil) above. This will bring up a screen that looks an awful lot like the Add Issue screen except it will say Edit Issue: XXXX. The first thing you will probably notice is that the Description Field is empty. Don't Panic! Your original description is not lost. The system adds the new description entry to the field with a time stamp as well as the name of the user that entered the information. The field appearing blank can make it a little difficult sometimes to update, so we recommend working with two monitors, or resizing the Issue screen so you are able to see the base page as well.

If the issue was resolved? Great! Update the status to Resolved and select save, You don't need to do anything else to this issue.

If the issue was not resolved or there was a request for more information, update the description with the new details, assign the issue back to the pillar lead and update the status to Open.

Assigning an Issue in OTM

Wondering who to assign that data validation ticket to in OTM? This Project Analyst Specific Matrix for Assigning Tickets in OTM should help.

Once an issue has been resolved to the satisfaction of the end user, it will be assigned back to the end user for resolution. We always want to make sure that the person who reporting the problem verifies that the problem is fixed. I think we have all felt the frustration of submitting a trouble ticket in a system, waiting to hear back for what seems to be an absurd amount of time and then following up, only to discover that your ticket was closed by someone that never even reached out to you to let you know they were working on it. We don't want that to happen here. It may sometimes get frustrating to have to retest and recheck things you have reported, but that is preferable to having issues tickets closed without the underlying issues actually being resolved and without the end user being made aware of what is going on.

After an issue has been set to resolved, there may be circumstances that occur that warrant revisiting an issue. If an issue is found in a later conversion cycle that is substantially similar to a previously resolved issue, rather than reopening the previous issue, add a note in the description letting the analyst know that this may be a repeat of a similar issue found in cycle X. If an issue is returned to you with a status of Pending Customer Response and a resolution entred in the resolution field, but the stated resolution does not actually fix your issue (as addressed in the previous section), update the issue as required. This would not count as 'reopening' an issue as the issue had not actually been closed or resolved. If, during the same conversion cycle, an issue that was previously tested and confirmed as resolved becomes an issue again, this is when an issue would need to be reopened. If an issue is reopened because it has re-occurred, there are two ways that this can be addressed. Either way is acceptable.

Navigate to and locate the original issue ticket using methods described in previous sections.
Edit the description to include that this issue previously appeared resolved but is not occurring again.
Update the Status to Open and update the Assign To field to the pillar lead.

Navigate to the Issues Tab and create an issue following the directions in the previous sections. After saving the issue ticket, select Add/Edit next to Associated Issues in the right side. Set the Search Parameters to find the IssueId of the previous issue ticket. Select the correct issue ticket in the results field and select OK.

How to Pass a Module

Once a module has been fully validated, you will report this completion through the OTM Test tab. This will only be done once you are ready to say "This area is cleared and passed". 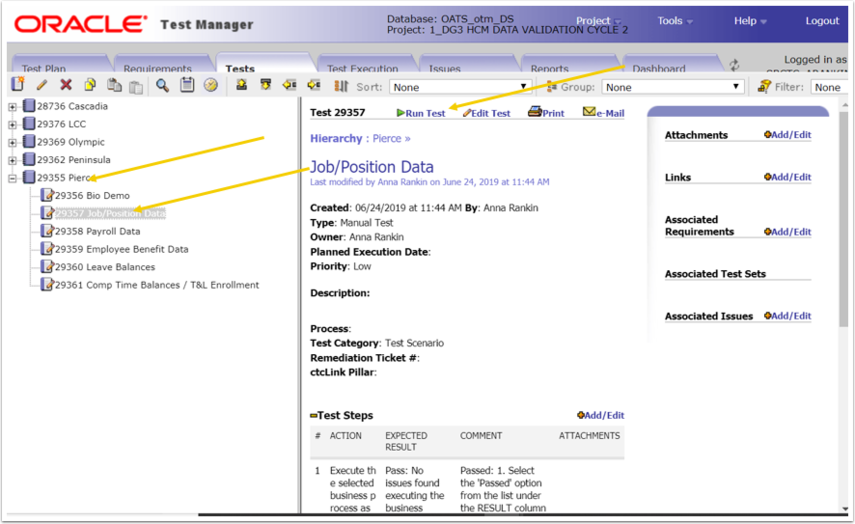 After logging in to OTM and verifying your project, navigate to the Test tab. Select your college or location. Select the module or area you are ready to pass. You'll know you have gotten to the test that can be passed because you will see a green triangle next to the words Run Test at the top of the page. Select this green arrow.

Leave the Run Name as the default.  Depending on the Cycle or Sprint and Project, there may be other fields on this page in future iterations.  Examples will be Location or Cycle #.  I will try not to ever put a question in this page that you have to think about to answer.  Only easy questions here, I promise.  It’s for tracking and reporting purposes.

Enter the answers to any required questions and select Run. 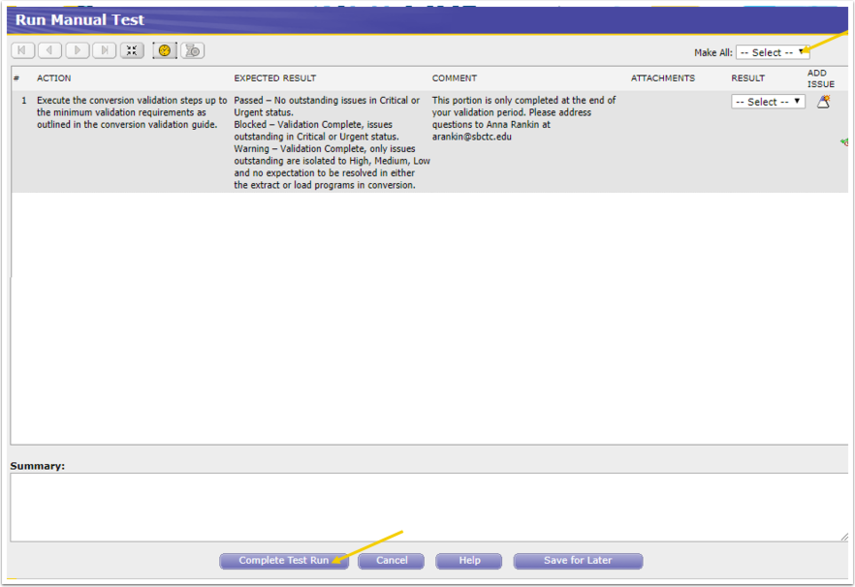 Select Make All: Passed and then select Complete Test Run 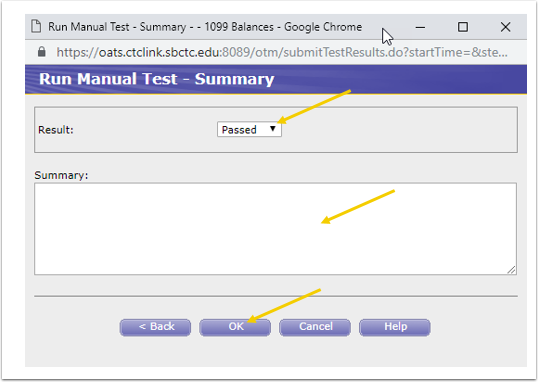 Verify that the result says Passed, enter any summary notes that may be helpful and select OK.

That’s really all there is to it.  You have successfully reported a section or module has passed cycle validation.